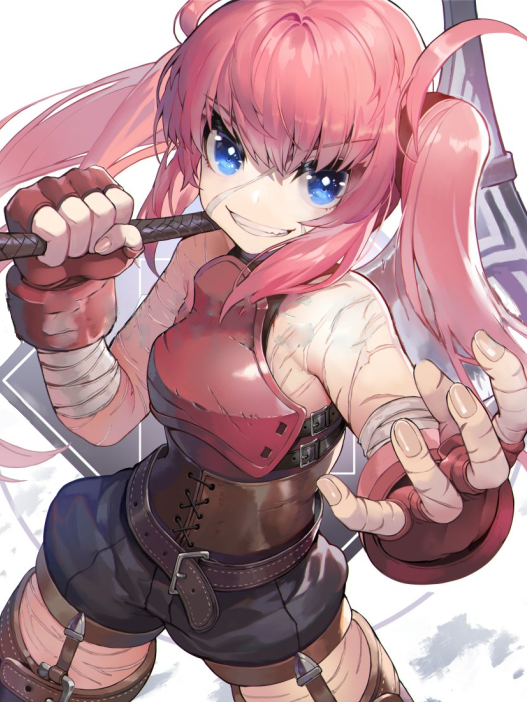 A peripatetic performer, tirelessly travelling the island so as to spread her love and cheer to as many of her present-and-future fans as possible! It seems odd to the casual observer, how someone as dedicated and talented as her just can't seem to hold-down her own troupe!

Then again, there's less and less watchers for an entertainer to amuse nowadays, and Amie doesn't seem to take too well to people not paying attention to her... or questioning her singing ability.


It's tough for a girl to get ahead in the dry town of Wiksik, so she thought she'd sign-up with the local gang, stinking of sour bone-dust as they might.

A great actress can and must put their very best enthusiasm into any gig, she thinks. One-hundred-and-ten percent! She doesn't quite seem to have grasped what the Necromancers' rituals actually are, though.


Ugh, I think my wardrobe's going to be insufferably impressive from now 'til the end of the world! Wiksik and York were so ungrateful, so ungrateful - I put on free shows every night I could, and what were the thanks I got? It's not like it's my fault that when I did a sword-dancing show, I accidentally cleaved through 3 of Azuma's characters in one move! It was one time!

Still, call it a mixed reception, right? Happens to the best of us, and the show must go on! My sister followed my trail of torn skirts to here, no doubt there're others too! Eeee, hehe, I'm so lucky to have the fans I do!

- Dam Frawd
- Khal Athrokhar
- TheDreadThespian burt reynolds I think you left 1 minute before I came back! To, um, definitely not kill you. I'll call that fate! Take care, hun.
- Clan members, obviously! I'm not that indiscreet.
- All Natives currently, except mass-murderers. Even an idol needs a little bit of pre-emptive self-defence, sometimes! Although if someone with very bloody hands would like me on their side and vice versa, I'm happy to listen.

Outsiders, if you'd like to speak to me on the road, and make a little peace with your so-graceful deity, please use the Native tongue if you may!


Drift Hi hun! So I caught wind that my little sister told on me to you! Sigh, she can be such a party killer, sometimes... is there anything more of an annoyance? So I had to politely ask her to drink somewhere with a lil' more of a fitting atmosphere. I'm sure you understand! I'm not looking for any bad blood though, trust me, all I'm doing is ensuring your good city's welcoming a higher class of character. We've had enough years of bar-slouchers, it's boring, it's boring! Anyways, I'll look the other way if you do! Kisses.

Jean Lafitte Hey! That's not how sparring works! Besides, I thought you just loved me hanging off your arm for the last couple, cutie. Don't my shows make your wracked old heart beat?

Moyabu Forrester Little sis! Ew, I ate some of Derby's horrid food. I know, I know, I shouldn't have, but I get all grumpy and crampy when I don't get my snacks! Don't worry though, I'm not going anywhere. Especially now I know all about your cute boyfriend! You never even told me you were spending so much time 'python hunting', I'm hurt! Make it up to me by letting me see him soon, okay? I wanna show-off to him - even if he is a bit of a blockhead! - and I want to show-off to you too, sis.