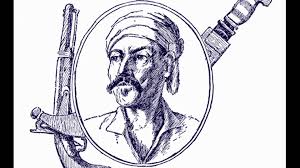 Jean Lafitte is a French privateer whose ship, the General Santander, unfortunately, was scuppered by the British navy on the NW coast of the isle of Shartak.
His crew deserted him and he is now trying to make the best of a bad situation.

Always on the lookout for the right tools to make ye olde boat out of driftwood, Jean is hoping for a way of escape.

On the recent advice of the local cannibalistic population
Jean has given up on reuniting with any of his mutinous crew and left the Shipwreck to find sanctuary elsewhere on this strange Island.

Any kills are self defence or revenge. I am a gentleman pirate, smuggler, and looter.

They have a parrot sat on their shoulder.
There is a monkey stood next to them.