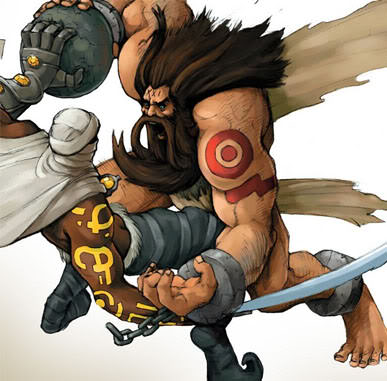 Vetari is a huge giant of a man with long and braided reddish-brown hair and a giant beard. A former pirate, Vetari once had a ready smile for friends and crewmates and a thirst for the blood of his enemies, but no more.

Vetari went missing without a trace some time ago. His friends could not find him. He reemerged one day, along with Rakmogak. His former red hair was dyed dark by the natives to help him fit in, despite his huge physique that is now covered with tattoos.

He earned the name Vicious because of his love for extreme brutality against his foes. He once drank the blood of a slain enemy in a barfight claiming that "his strength is now mine." Since joining the cannibals, he now dines on tasty outsider flesh like his new brothers and sisters.