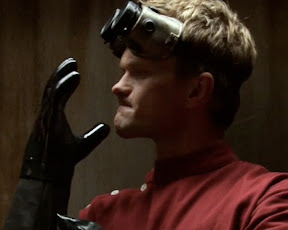 It's a tall, scrawney man dressed in a red lab coat, black gloves, and with a pair of safety goggles over his eyes.

He has a Ph.D in Horribleness, and decided to come to the island for a few reasons. First, after losing the girl he loved after an explosion involving one of his inventions, he was happy to move away from the familiar sights that reminded him of her.

Second, and most importantly, after bringing a reign of horribleness to Los Angeles, Bad Horse tasked him with spreading the influence of the Evil League of Evil to the island of Shartak.

As he stepped off the boat, he was eager to get to work. It's a Brand New Day, after all.

And if Everyone's a Hero, including you- he'll be sure to use his Freeze Ray to take you down. A Man's Gotta Do what a man's gotta do, after all.

Xev, my dear- I see you're not around anymore, after my long absence. If you return, I'm back at our old hideout :)