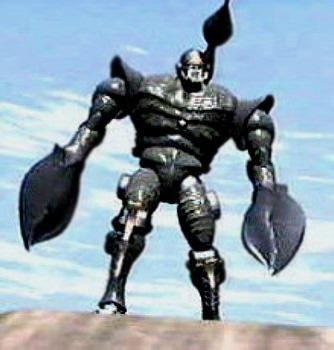 ^={{{:=<
A grey and oversized scorpion in his Totem form, Scorponok resembles his chosen Totem greatly in his humanoid as well! He has large clawed hands and a prehensile bladed Clublike blowpipe-tipped scorpion tail that stretches behind and over him in his humanoid disguise as well as his Totem form. He appears to have a helmeted head; a strip of yellow crystal for sight above a pronounced shovel-like tusked fanged jaw. He rarely speaks, lets his actions do the talking. He retains some sense of honor and only kills the offensive, but his true form exhibits it's tendencies in both manifestations, however there is more to him than meets the eye!
>=:}}}=^
Is thus far Still an engine of destruction, the worlds of Outsiders and Spirits concern him very little yet. All that matters to Him Now are Hunger and Revenge. He begins to Wander about now getting a feel for his surroundings. What forces drove him before to raid and ransack the habitats of his prey are still at work within him.
^={{{:=<
Villager / Scout / Warrior / Shaman of Rakmogak!

Is only Just now taking an interest in the words of the pale ones, both ethereal and edible, gleaning their hissing honking gabble must be a form of language. His entire purpose now has been destruction of all life and digestion of it. Still will not kill the Peaceful, but otherwise his vengeance knows no bounds. This Island will be brought to it's bloody knees. You will be Begging him Just to Stop.

Last seen: Haunting the Sacred Space's Black Tower. The floor of this room is almost certainly unsafe in places. The staircase leading downstairs seems solid enough but looks can be deceiving.